Money
Tori Dunlap paired freelancing with her 9-to-5 to meet her savings goal — by age 25.
Bustle’s Personal Best is a series on how to identify — and then unabashedly go after — what you truly want, by learning from people who’ve already done it.
In her early 20s, Tori Dunlap set a goal for herself: By age 25, she’d have saved $100,000. And she pulled it off, meeting her goal just a few weeks after her 25th birthday.
Today, at 27, Dunlap sees herself as an “unabashedly feminist” personal finance expert, and she is passionate about helping women with their finances, both through social media (she has 2.2 million followers on TikTok) and through her company, Her First $100K.
Dunlap clearly sees that first savings goal as a big benchmark in her personal finance journey, given that she named her company after it. Here, she tells Bustle how she did it.
What made you choose $100,000 as your goal?
I read an article in 2016 about someone who had a $100,000 net worth at 25. It had always been a goal of mine to start saving at a young age in order to achieve more financial security, flexibility, and freedom — but when I read that, I thought, “Maybe I can do one better.”
How long did it take you to save the money?
It took me a little over three years to hit my $100,000 mark, but I did it, and by my deadline — I was 25 years old and just a few months.
How did you make it happen?
I’m the first to acknowledge that it wouldn’t have happened as fast if I had student loans to pay off, and if I hadn’t worked three jobs in college, received tens of thousands of dollars in scholarships, and had some contributions from my parents.
The need to hustle was a no-brainer. I worked a 9-to-5 job in marketing, never making more than $80,000 a year (I made $55,000 a year with my first job out of college), and paired it with a freelancing gig on the side, which was a contracted role in social media marketing for six months.
I was working 15 hours a week freelancing, with my 9-to-5 job, but it was worth it, as my freelancing income, plus 20% of my corporate salary, went into savings. My side hustle was crucial for hitting $100,000, as I made a nice bit of cash that I immediately saved.
I must admit, I lucked out with my first client who honestly overpaid me — the scope turned out to be less than I had imagined. Plus, I was bold and confidently negotiated a higher rate, refusing to limit myself out of fear and of not asking, in order to see what was truly possible.
Choose an edition: 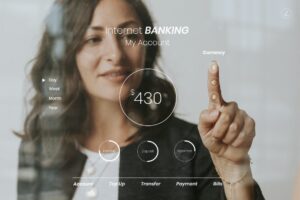 August 27, 2022
Save
Banking in the Digital Age: What It Means
Sponsored